Don Schramm  wrote this piece in support of KBTL and submitted it to the Burlington Free Press: 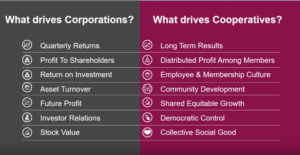 Eighteen years ago the Burlington City Council made an extraordinary (and good) decision. They selected among several candidates and chose the Onion River Coop to create City Market as our downtown supermarket. Today the Council has the opportunity to make another extraordinary decision – to convert Burlington Telecom into a Utility Cooperative similar to Vermont Electric Coop and Washington Electric Coop. The Keep BT Local Coop could provide the necessary financing and leadership for this conversion.

The sale of BT and its conversion to a Utility Cooperative would result in two major accomplishments. The first would be essentially the selling of Burlington Telecom to ourselves. The citizens of Burlington currently own Burlington Telecom. Those same Citizens will own it after the conversion. This means that Burlington’s citizens – not outside investors or shareholders — will determine the nature and pace of expansion. The second accomplishment would be the embracing of a business model that reflects the values of most Vermonters. We would be choosing the Cooperative Model versus the Corporate Model. A summary of their differences is in the chart above. Essentially it boils down to this: there will be no third party, whether local or out of state, making decisions that impact us, setting subscriber rates and collecting the profits from our purchases.

Imagine it: next year, after the Public Service Board approves the conversion of Burlington Telecom, our new Telecom Utility Cooperative will instantly have 7,000 member / owners. 7,000 citizen sales agents for the improvement and growth of our telecom services. With a Utility Coop, every new customer is a new member/owner. When City Market opened in February 2002, we only had 2,000 member/owners. Today that number is over 12,000. This coming September 26th, the Onion River Coop will be having its annual member meeting which hundreds of member/owners will attend. I am sure some of you have been to those glorious meetings.

I look forward to the member meetings our new Telecom Coop will have. Imagine all the ways our new coop will enhance our lives and our community just as the Onion River Coop is doing today. I sincerely hope that our current City Council will have the discernment and wisdom of their predecessors and will choose the Coop model for the future of Burlington Telecom.

You can Don’s piece at the Free Press here.